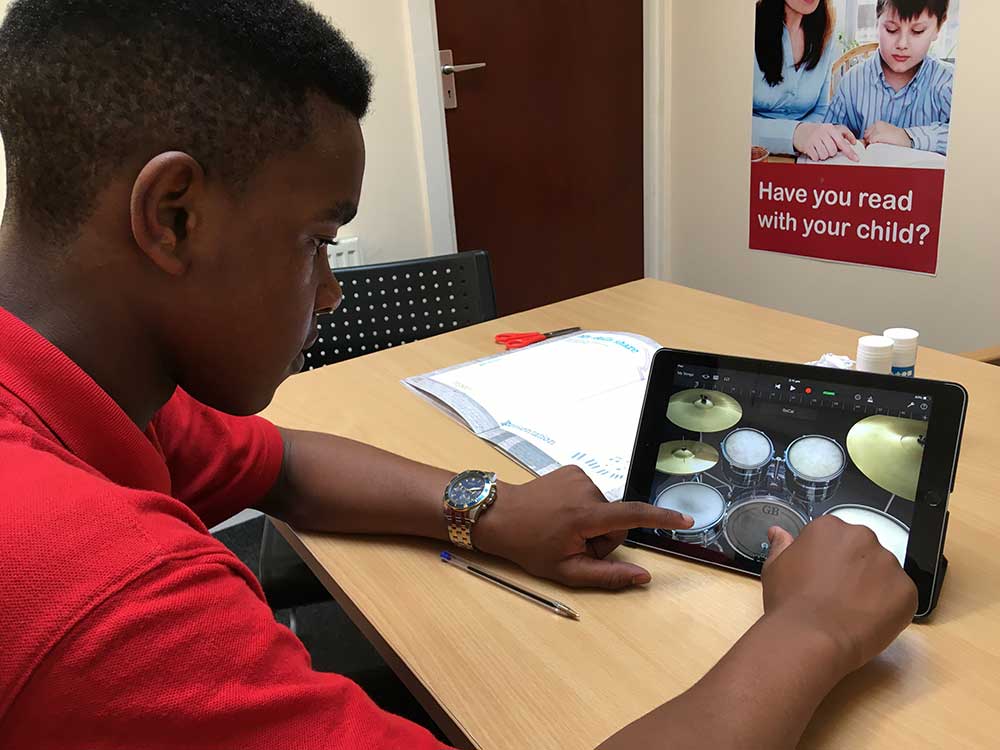 We offer 1:1 music and visual art based mentoring to young people in schools and at our studios. This includes activities such as songwriting, lyric writing, recording and graffiti. All our mentees can acheive a Level 1 or Level 2 accreditation as part of our programme. 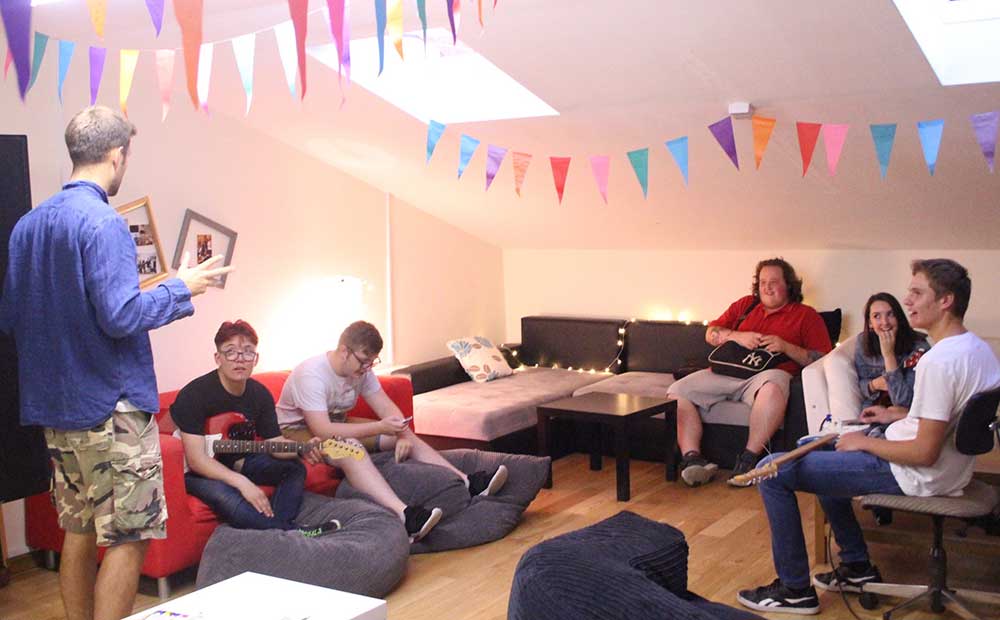 We run regional training days, sharing our experiences and resources to assist you in starting your own Music Mentoring project. We can also come to you and give specific input on how to best utilise your space and outreach to your area. As part of this service, we can offer ongoing support 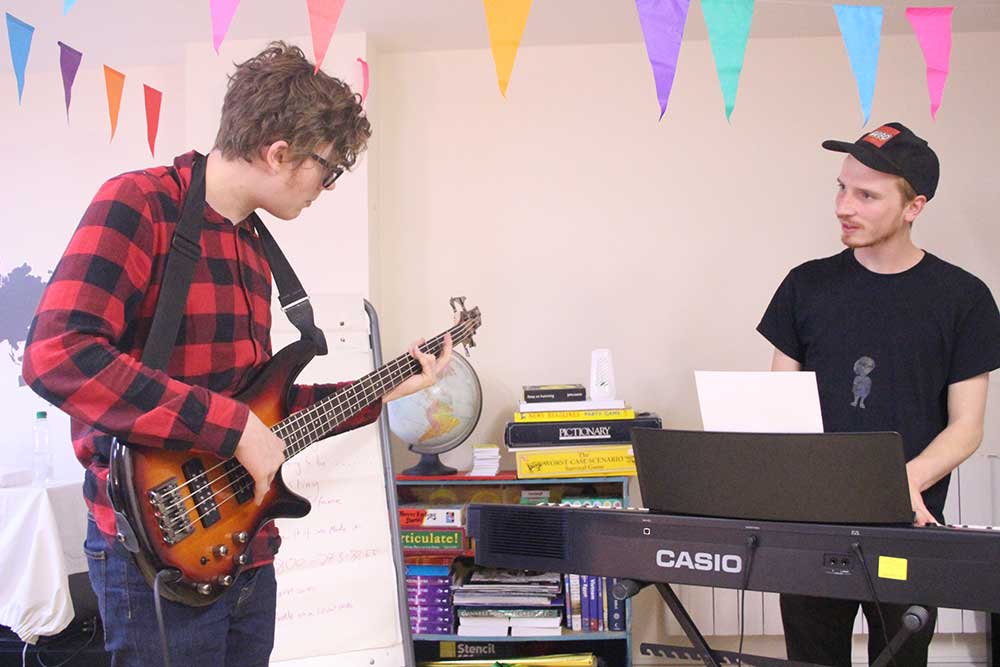 Music brings people together. Young people co-write, jam and complete musical challenges together. Irrespective of school, background or even musical ability, we have found friendships and community form quickly and flourish.

We believe every young person will benefit from meeting regularly with a mentor. Experience has taught us that engagement with a positive role model will improve confidence and give youngsters a listening ear to which they can ask questions and share experiences. Music provides us with an additional medium to encourage creativity and self expression.

Music Mentoring began as a pilot in June 2017 under the name ‘tbsongwriting’. Our founder, Dan had seen the direct impact of 1-1 mentoring through his years of experience as a youth worker but he was interested to see if offering music as part of sessions could help. In partnership with Shoebury Youth Centre, Dan sought out referrals from the lcoal authority. They were mostly 15-18 yrs old and ‘NEET’ (not in education or employment). Dan found that incorporating music and songwriting into mentoring sessions resulted in significant improvement to self-esteem. Where as in London he had found that new mentees often only engaged in surface level conversation for months, music provided a safe medium for youngsters to open up about their well being much sooner through lyric writing and creative expression.

Now, in 2020 a team of four mentors work with up to 20 young people a week and run weekly group sessions, specialising in music and now art as well.

- mentored 68 youngsters 1:1 on a weekly basis (96% of these have been battling with poor mental health, considered ‘looked after’, been at risk of offending or encountering some level of difficulty) since Jan 2018

- 94% noted an improvement to their confidence or self-esteem

- 29 have completed a Level 1 or Level 2 accreditation

- 200+ youngsters have engaged with us (including weekly group Creative Hub sessions, Songwriting Workshops and our Village Green Festival workshop)

- Grown from a one person to a team of x4 mentors

We believe the most effective form of support is given one-to-one. In this environment, mentors offer support and encourage creativity and expression. This offers young people an immediate role model; a neutral party between parent and teacher, focusing solely on the young person's well being.

If you are looking to make a referral click here

We run regional training days, sharing our experiences and resources to assist you in starting your own Music Mentoring project. We can also come to you and give specific input on how to best utilise your space and outreach to your area. As part of this service, we can offer ongoing support

Music draws people together. Young people co-write, jam and complete musical challenges together. Irrespective of school, background or even musical ability, we have found friendships and community to form quickly and flourish.

"In a relatively short amount of time I've spent in this music programme I have found my music composition skills have increased dramatically. There has not been one second where I haven't thoroughly enjoyed it and it has been a perfect opportunity for me to express myself using music"

"Music Mentoring has boosted my confidence, normally I'm shy. I use Garageband at home now and it's kept me off video games. I'd 100% recommend these sessions as it keeps you out of trouble."

"The sessions were organised and well run. The mentor acted as a very positive role model for the students. Students engaged well with the project and there were noticeable improvements in their achievement and attitude in school. I would wholeheartedly recommend this project to other schools as a strategy to re-engage young people through their interest in music."

"Yes, it was an incentive to stay in school. [Music Mentoring] has certainly increased my confidence, creativity and knowledge of music."

Thad (mentee at risk of engaging with gangs)

"This is a great project to engage young people in. Young people often don't feel listened to and this offers them a safe space to be mentored by positive role models whilst giving them a voice to express themselves through songwriting."

"I would say say 'Mark' was at a crossroads before these sessions and could have quite easily taken the wrong turning but with the support and positive experience of the sessions he has not only found a focus but has also found something he is willing to make the right choices for and commit to."

What Young People Say About Us

Your message was sent sucessfully. We will aim to be in touch soon.
Sorry, we had a problem sending your message. Please try again later.